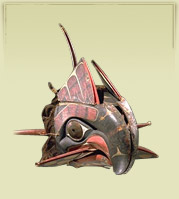 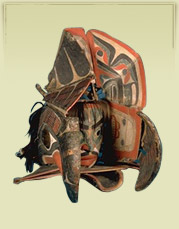 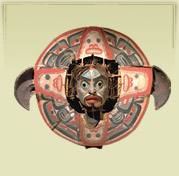 Long before the arrival of Europeans, the art of animating articulated figures existed throughout the territory that make up Canada and indeed throughout the Americas. A number of Aboriginal cultures use articulated figures and masks during ritual ceremonies. The examples that are most striking - for their size, the vigour of their carving and the complexity of their mechanisms - can be found on the West Coast, particularly among the Haida, Kwakwak'awakw and Tsimshian cultures. These figures and masks, used in dances or as part of dramatic ritual presentations, most often represent supernatural beings or spiritual powers. When they were first made, their methods of fabrication and animation remained secret. The articulated figures, evoking invisible forces, highlight the connection between the world we know and the intangible world of spiritual powers.

In New France, the first known record of a European describing an Aboriginal "puppet" dates from around 1655. During a healing ceremony, a Jesuit relates having seen an Iroquois shaman using, in addition to medicinal herbs, a figure in the form of a squirrel animated by strings of plant fibre.

Tied as they are to a ritual function, Aboriginal traditions related to animating objects have never really overlapped with European puppetry traditions, which are largely associated with entertainment. However, during the 1950s, 1960s and 1970s, several Canadian puppeteers drew inspiration from Aboriginal art and borrowed themes, legends and characters from Aboriginal oral culture. While - especially at the beginning - not all of this borrowing was done with full understanding of the nuances involved or the contemporary significance of these traditions, the works they created nonetheless pay homage to the richness of an enduring cultural heritage.