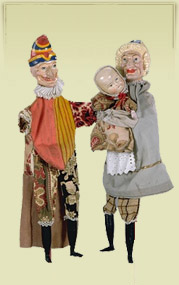 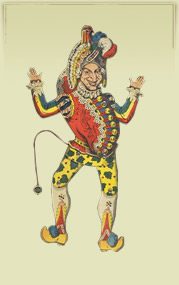 The first record of European puppets in the Americas dates from the early sixteenth century, during the time of the Spanish conquistadors. Among the men accompanying Hernando Cortés was a puppet handler. We will never know if his puppets succeeded in amusing or edifying Cortés' men, but their presence reminds us that, in Europe, puppet theatre was a respected and popular form of entertainment.

During this period, the two most common types of puppet were the hand puppet and the marionette, and so these were the puppets best known to the colonists in New France. The early days of a colony would have left little time for leisure and, although it is quite likely that puppet shows were staged from time to time, it was only towards the middle of the eighteenth century that a permanent puppet theatre was opened in Québec City. We know of its existence through Philippe Aubert de Gaspé's Mémoires, published in 1866.

This small theatre was founded by a soldier named Jean Natte: an artist by trade who arrived in the colony in 1733. Father and Mother Marseille - as Natte and each of his successive wives were nicknamed - would have used marionettes. According to Gaspé, the city's inhabitants thoroughly enjoyed their performances, which, from Christmas through to Lent, were staged two or three times a night. Wealthier families could also hire Father and Mother Marseille to give private shows in their homes. The theatre, continued by Father Marseille's stepsons, remained active for more than fifty years. Unfortunately, during the troubles surrounding the 1837-1838 Lower Canada Rebellion, the authorities totally demolished the theatre. Nothing whatsoever - neither puppet nor document - remained of Canada's first permanent puppet theatre.