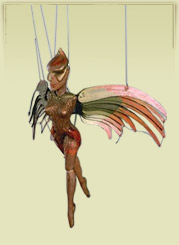 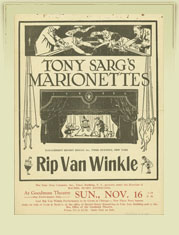 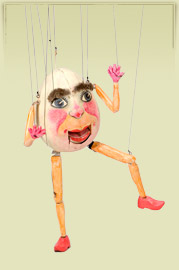 First Half of the Twentieth Century

At the beginning of the twentieth century, those within Europe's avant-garde artistic circles who were redefining the visual and performing arts took an increasing interest in the medium of the puppet. However, during this time, a new medium - film - was drawing large crowds, making it hard for traditional puppet theatre to compete and, slowly but surely, the public's interest declined. Punch and Judy shows continued, but they had now been firmly relegated to the world of children's entertainment.

Change came about, however, between the two world wars. During the 1920s and 1930s in the United States, puppetry enjoyed a renaissance, due in large part to puppeteer Tony Sarg. While preserving puppetry's place within the realm of entertainment, Sarg sought to raise artistic standard in all aspects of performance, such as storyline, set, puppets and manipulation. Sarg also contributed to the move to make public the jealously guarded secrets that had, to this point, surrounded the making and manipulation of marionettes and their special effects. Books and magazines appeared featuring patterns, instructions for making puppets, and methods of manipulation. As a result of this information sharing, puppetry grew into something of a fad. Making and manipulating marionettes, in particular, became a passionate hobby for many amateurs.

Puppetry publications circulated more widely, puppet theatre companies toured, and this renewed interest in the genre eventually spread to Canada. Artists such as Rosalynde Stearn, Violet and David Keogh and Muriel Heddle laid the foundations for a professional-level puppet theatre with an artistic vision. The Keoghs and Muriel Heddle presented adaptations of musical works, which, in some instances, even featured marionettes accompanied by the Toronto Symphony Orchestra. As a scholar, Rosalynde Stearn fostered recognition of the art of puppetry through her writings and lectures, as well as the assemblage of an important puppetry collection.

In Quebec, Montréal audiences were introduced to the artistic possibilities of puppetry with the visit of the celebrated Italian puppet theatre company Teatro dei Piccoli, in 1933. Following the Second World War, Albert Wolf - a German who had staged puppet shows at Camp Farnham (Quebec), where he was a prisoner-of-war - also enhanced appreciation of the art. When Wolf decided to return to Europe, he left his marionettes to an associate, Micheline Legendre. In the years that followed, Legendre would play a crucial role in the development of professional puppet theatre in Canada.