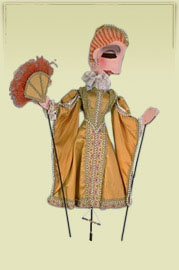 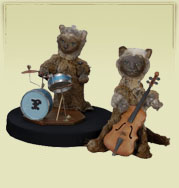 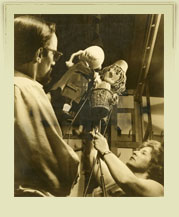 Throughout the 1960s, puppetry festivals, symposia and, for some companies, foreign tours increased the potential for cultural exchange. In Europe, from the beginning of the twentieth century, artists inspired by Eastern traditions had begun to take an interest in different forms of puppet theatre and their techniques, such as shadow theatre, rod puppets and the full-view manipulation used in Japanese Bunraku theatre. Following the Second World War, artists from the Eastern Bloc countries, with the support of the State, were at the forefront of innovation in the field of stage direction and staging design. They would have a major influence on the puppet theatre of the 1950s and 1960s by expanding the use of rod puppets and black light theatre and introducing a more refined and stylized aesthetic. These new approaches, brought to Canada by immigrant artists or artists who had travelled abroad, drew increasing attention within the puppetry community

For example, Leo and Dora Velleman, who arrived in Toronto in 1950, founded Canadian Puppet Festivals, one of the most influential puppet theatre companies in Canada during the 1960s and 1970s. They designed puppets with highly stylized features - particularly rod puppets, which were at times manipulated in full view of the audience. The Vellemans toured Canada, the United States and Europe, and trained numerous Canadian puppeteers.

For Expo 67, Micheline Legendre organized Canada's first truly international puppetry festival. This festival - in which companies from Germany, France, the former Czechoslovakia, the United States and Canada participated - gave audiences an opportunity to discover the many forms of puppet theatre.

The 1960s also saw the growth of professional puppet theatre on the Prairies. Amateur puppet theatre had existed in this part of Canada since the 1930s, notably in Winnipeg, but it was during this period that the increase in cultural exchange revealed the full potential of puppetry to artists and audiences alike. In British Columbia, where puppet theatre developed at about the same rate as in Ontario, the Vancouver Guild of Puppetry was established in 1961. This organization, which remains active today, made a significant contribution to the development of puppet theatre in Western Canada, through workshops, festivals and exchanges with American puppeteers.