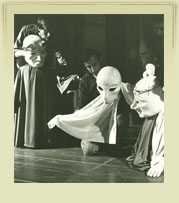 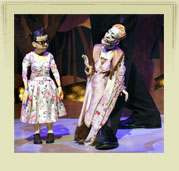 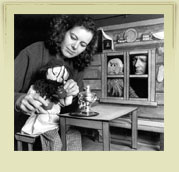 Full-view manipulation has occupied a central position in the puppet theatre of recent decades. The manipulator is not only visible, but he or she also interacts to a greater extent with the puppet and, in some instances, becomes a stage character as well. Such interaction can serve to highlight the very message behind the performance, particularly when it symbolizes the bond that unites creator and creation. The relationship created between the manipulator and the object being manipulated is one of contemporary puppet theatre's much favoured areas of exploration.

In the 1970s, Felix Mirbt had shown how the use of puppets, combined with actors/manipulators, could help to broaden the meaning of theatre pieces meant for on-stage actors. Mirbt demonstrated this in Büchner's Woyczek and Strindberg's A Dream Play, among other pieces. These productions also showed that it was possible to develop a puppet theatre repertoire specifically for adult audiences. Albertan Ronnie Burkett, whose work is known internationally today, founded the Ronnie Burkett Theatre of Marionettes in 1986. Using marionettes, which had remained somewhat neglected over the previous decade, Burkett began creating works around contemporary themes clearly aimed at adult audiences, thus exposing them to the dramatic power of puppet theatre.

In 1981, the Assocation québécoise des marionnettistes, a professional organization devoted to the promotion and development of the art of puppetry, was created in Quebec. In 1989, an international puppet festival, La Semaine mondiale de la marionnette - now called ManiganSes, Festival international des arts de la marionnette - was launched in the Saguenay region. This biennial event presents puppet theatre companies from across Canada and around the world, encouraging exchanges between artists.

Since the 1990s, new puppet theatre companies have continued to emerge. While the repertoire for young audiences has continued to flourish, a repertoire for adult audiences has become increasingly well established. In Calgary, where puppet theatre has been particularly dynamic since the 1990s, the name given to an entirely new festival - the International Festival of Animated Objects - clearly illustrates today's multidisciplinary approach, which combines arts such as puppetry, dance and video while, at the same time decompartmentalizing the different genres.

Until quite recently, no formal puppetry training was offered in Canada. The craft was either learned through working with established puppeteers or through training sessions and workshops offered within certain dramatic arts programs, by a puppet theatre company or by a professional puppetry association. In 2007, the Université du Québec à Montréal established the first specialized higher-education diploma devoted entirely to puppetry. The formalization of puppetry as a discipline clearly indicates a growing recognition of puppet theatre in Canada.