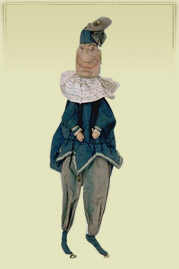 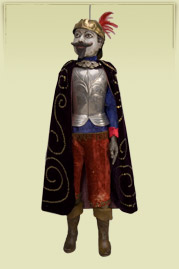 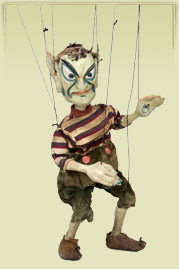 The origins of European puppet theatre date back to Ancient Greece and even to Ancient Egypt. Long established as a form of popular entertainment, in the Middle Ages puppetry expanded to become a medium for illustrating stories from the Bible. Stemming from these two main functions, over time, various forms of puppetry emerged. Of particular note are three genres of puppet theatre that led to countless variations throughout Europe and later, through colonization, across the Americas.

The first, associated with the hand puppet, is a popular form of itinerant theatre featuring burlesque and satirical comedy. Over the centuries, the heroes of this type of theatre evolved throughout Europe: Italy's Pulcinella, France's Polichinelle and Guignol, England's Punch, Austria's Kasperl, Czechoslovakia's Kasparek, Germany's Hänneschen, Russia's Petrouschka ... even Turkey's Karagöz and his Greek cousin Karaghiozis, although they belong to shadow theatre, are part of this great family. These characters, often derived from a single ancestor, share similar traits. Impish, blustery, wily and provocative, they defy the established order. Traditionally, puppet shows were presented in public venues such as fairs and marketplaces. Their simple plot lines invited improvisation, allowing the puppeteer to draw inspiration from current local events and to adapt a story to a specific audience.

A second genre, the epic, also part of popular tradition, added legends, historic sagas and tales of chivalry to Bible stories. The Opera dei Pupi from Sicily, featuring rod marionettes, typifies this genre perfectly; variations of it also existed in Spain, Flanders, Wallonia and northern France. The genre's repertoire, with origins reaching back to the epic medieval poem The Song of Roland, is composed of romanticized tales of the Crusades during the reign of Charlemagne. The episodes - a succession of dazzling battles, amorous declarations, betrayals, magical apparitions and vengeance - were presented nightly in the form of a serial that could last a whole year. Rod marionettes, some more than a metre (3.3 ft.) high and as heavy as 16 kilograms (35 lbs.), with feet that pounded the stage staccato-style, gave this type of puppet theatre an unparalleled vibrancy - particularly during battle scenes, in which heads would fly and blood (beet juice!) gush.

A third, and more sophisticated genre, associated with the marionette, began to develop during the seventeenth century. In permanent theatres specifically built for the purpose, marionettes acted out works from plays, operas and ballets for an aristocratic or bourgeois audience. Haydn, for example, composed five operettas for marionettes. Among all other types of puppet, marionettes lent themselves to the most realistic imitation of human movement. By perfecting mechanisms and technical virtuosity, these more refined shows sought to reproduce such movement as precisely as possible. The quest for ever-more-realistic mimicry by marionettes was later perpetuated within the more popular tradition of variety shows and music hall productions.