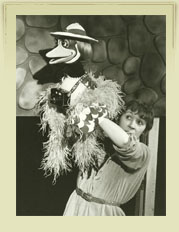 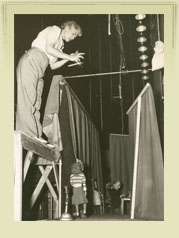 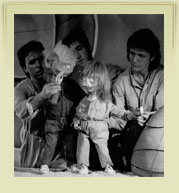 Types of Puppet and Manipulation

Setting objects in motion lies at the heart of puppetry. The means by which these objects are set in motion form the basis of the classification of puppets.

These six types of puppet are, in turn, traditionally associated with three major positions from which they can be manipulated:

If we look at the entire history of puppets from around the world, we find several types of puppets and theatrical forms that do not fit into any of the categories above. Is a water puppet a rod puppet? How do we work a body puppet? What about a limberjack? Furthermore, contemporary forms of puppet theatre, which encourage experimentation and a blending of genres, have generated an entire range of hybrid puppets, as well as recycled objects and ephemeral forms used as such, all of them difficult to classify.

This multiplicity of forms has led to the suggestion that puppets be classified according to their proximity to the puppeteer. Eileen Blumenthal outlines this typology in her work Puppetry: A World History, 2005.

Next comes the family of puppets animated "beyond" the manipulator, from direct manipulation puppets to puppets that need devices, the most common being strings or rods. Within this large family of puppets, we can group together the two-dimensional puppets that share certain characteristics with the image, for example, shadow figures or silhouettes. These puppets can also be activated directly or with rods and strings.